Pics from
the old days

Imagine that it is the early 1900's! Factories are failing and families are starving while the rich play. Imagine that your Grandfather's only 6 years old during the snowstorm of 1905. He walks fifteen miles in waist deep snow to sell penny newspapers. This was the experience of many children in Connecticut and the Northeast! 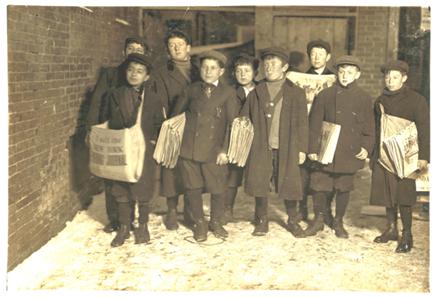 During the end of the 19th and the majority of the 20th century the Italians, Gypsies and Travellers and Eastern Europeans faced many indignities. Before the WW1 many were incarcerated and during this time the incorrect slang term Wop was introduced to define them. In Waterbury Connecticut they were the US defense industry laborers. The book American Wop subtlely descibes their travails and explains the numerous improvements through the true story of a suffering "WOP!"

The author weaves his relative's stories together in a form that brings together the first-rate appeal of the characters, their forgotten society and our Americana. Their stories tell of a time when life was harder but simpler and people once had hope for a healthy safe environment using simple technologies. The hope died in the 1890's with rampant consumerism and marketing. A new time began where the products were never again made to the old standards. It was a time where the good labor was laid to rot when being replaced by automation. A time when the Government put small alcohol manufactures out of business to create profits for the big conglomerates. The true story of American Wop!